There is something so devastating about The Great Gatsby that seems to ring true to this age as well as it did in the roaring 20s. We live in a society where we are encouraged to want greater and brighter things. We are presented with images of wealth and luxury as a way to goad us into going after these things to no end. Whether it’s a shiny new car or a huge house, the desires of the consumer are infinite. F. Scott Fitzgerald’s novel The Great Gatsby was published in 1925, in the heart of a great cultural shift in North America.

After writing quite a few book reviews on this blog, I decided that it is time to try something new. When I write reviews, my goal is usually to tell you why or why not a certain book is worth reading. I decided that I wanted to go in-depth into the books I enjoyed reading, instead of giving you a summary, or a “yes, read this book now,” or “no way, don’t waste your time.”
Oh, and be warned, this article contains a ton of spoilers. [Spoiler alert!] So, if you haven’t read The Great Gatsby, leave now before I ruin the book for you. And, if you say, “Nah, that’s okay, ruin it for me,” you really don’t know what you’re missing. Go read it now if you haven’t! 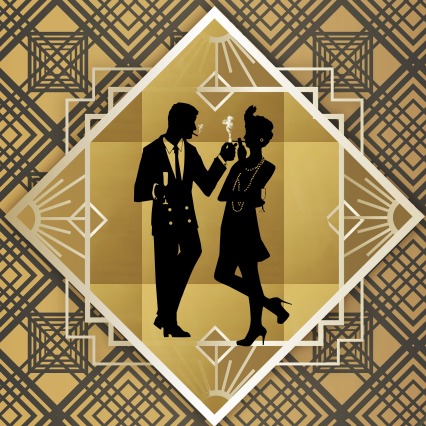 As much as I appreciate F. Scott Fitzgerald’s writing style, he writes in such a way that draws attention to his own writing. While this is more of an opinion than a critique, I prefer when writers sweep the reader away into their story instead of having them remark on each paragraph to examine its construction in relation to the atmosphere of the novel.

“And so with the sunshine and the great bursts of leaves growing on the trees, just as things grow in fast movies, I had that familiar conviction that life was beginning over again with the summer.” – The Great Gatsby, F. Scott Fitzgerald

Do I think that Fitzgerald is a terrible writer? Certainly not. He is very creative, and he has captured the ups and downs of the jazz age better than any writer of the 20s. His strength is in the way he constructed his characters. Fitzgerald’s characters in The Great Gatsby are iconic and memorable.

The most heartbreaking character in this book (no surprises here) is Gatsby. He is so caught up in his fantasies of Daisy that he changes everything about himself in order to please her. But is Gatsby really in love with Daisy? It would be a nice thought, but I think Gatsby is so deluded into his fantasy of being ostentatiously wealthy that Daisy is just another piece to obtain.

“There must have been moments even that afternoon when Daisy tumbled short of his dreams — not through her own fault, but because of the colossal vitality of his illusion. It had gone beyond her, beyond everything. He had thrown himself into it with a creative passion, adding to it all the time, decking it out with every bright feather that drifted his way. No amount of fire or freshness can challenge what a man will store up in his ghostly heart.” – The Great Gatsby, F. Scott Fitzgerald

She’s sort of like the cherry-on-top of an ice cream sundae. Her unattainability is just what makes her so attractive. If The Great Gatsby had ended in another way (other than Gatsby’s death), Gatsby wouldn’t have found true happiness with Daisy. Also, there is a good chance that Daisy would’ve gone back with Tom anyway.

Daisy is a strange character. On the surface, she seems to be the type of character who just likes to be wrapped up in silky furs and be paraded around as some sort of Barbie on holiday. But there is evidence that Daisy isn’t just an airhead. Daisy tells Nick about when her daughter was born, she says:

“I hope she’ll be a fool — that’s the best thing a girl can be in this world, a beautiful little fool.” – The Great Gatsby, F. Scott Fitzgerald

This is one of the few moments when we see Daisy give us insight into who she is as a character. You can’t help but wonder if Daisy plays the role of an airhead because she is trapped by her status as a wealthy woman living in the 20s. If there is one thing about Daisy that becomes increasingly evident as the novel progresses, Daisy is for Daisy. She only cares about her level of comfort. When she sees that Tom is capable of protecting her from being charged for Myrtle’s death, she quickly changes her alliances. I stand with Nick when he says,

“They were careless people, Tom and Daisy—they smashed up things and creatures and then retreated back into their money or their vast carelessness, or whatever it was that kept them together, and let other people clean up the mess they had made.” – The Great Gatsby, F. Scott Fitzgerald

I still can’t help but feel a bit bad for Daisy because society has made her into a monster, Gatsby doesn’t really know the real Daisy, and Tom likes to parade her around like a trophy.

The character I have zero pity for in The Great Gatsby is Tom. There is nothing remotely likable about Tom. He’s classist, he’s cheating on his wife, and worst of all, he is very racist. He is a good foil character for Gatsby. Gatsby may have a lot of faults, but he is an angel in comparison with Tom.
Finally, Nick, the narrator of this novel, is sort of an unfortunate bystander to all these events. Whenever I am working on an essay or if I am trying to analyze a novel, one of the first questions I ask myself is, “who is the narrator? And is he/she/it reliable?” Is Nick a reliable narrator? I’d like to think so for the most part. Nick’s distance to the immediate action, but closeness with the characters makes him rather objective but knowledgeable at the same time. Can you imagine if The Great Gatsby were told through Gatsby’s perspective!? We would be reading about one man’s incoherent fantasy. Daisy would be a one-dimensional goddess who is everything bright and good about the world. Yikes.
But Nick is a human being like the rest of us. Well actually he is just a made-up character, but you know what I mean. He isn’t without his biases. At the end of the novel, he has zero pity for Daisy. He doesn’t take the time to consider how she feels. His sympathies lie with Gatsby, and we as  readers, are inclined to do the same.

So, what did you think about The Great Gatsby? Do you have sympathy for Daisy, Tom, Gatsby, and Nick? What if The Great Gatsby were narrated through Daisy’s eyes (or Gatsby’s), do you think you would have enjoyed (or hated) the book? Do you like Fitzgerald’s writing style? Let me know in the comments below!

Until Next Time,
-Alice

4 thoughts on “On Reading The Great Gatsby by F. Scott Fitzgerald”

Bringing out the best in Everything ❤️

SHINee Before Flowers... '-'** <3 Everything and Anything About SHINee~!

Grab a drink, for this blog is snarky and full of spoilers